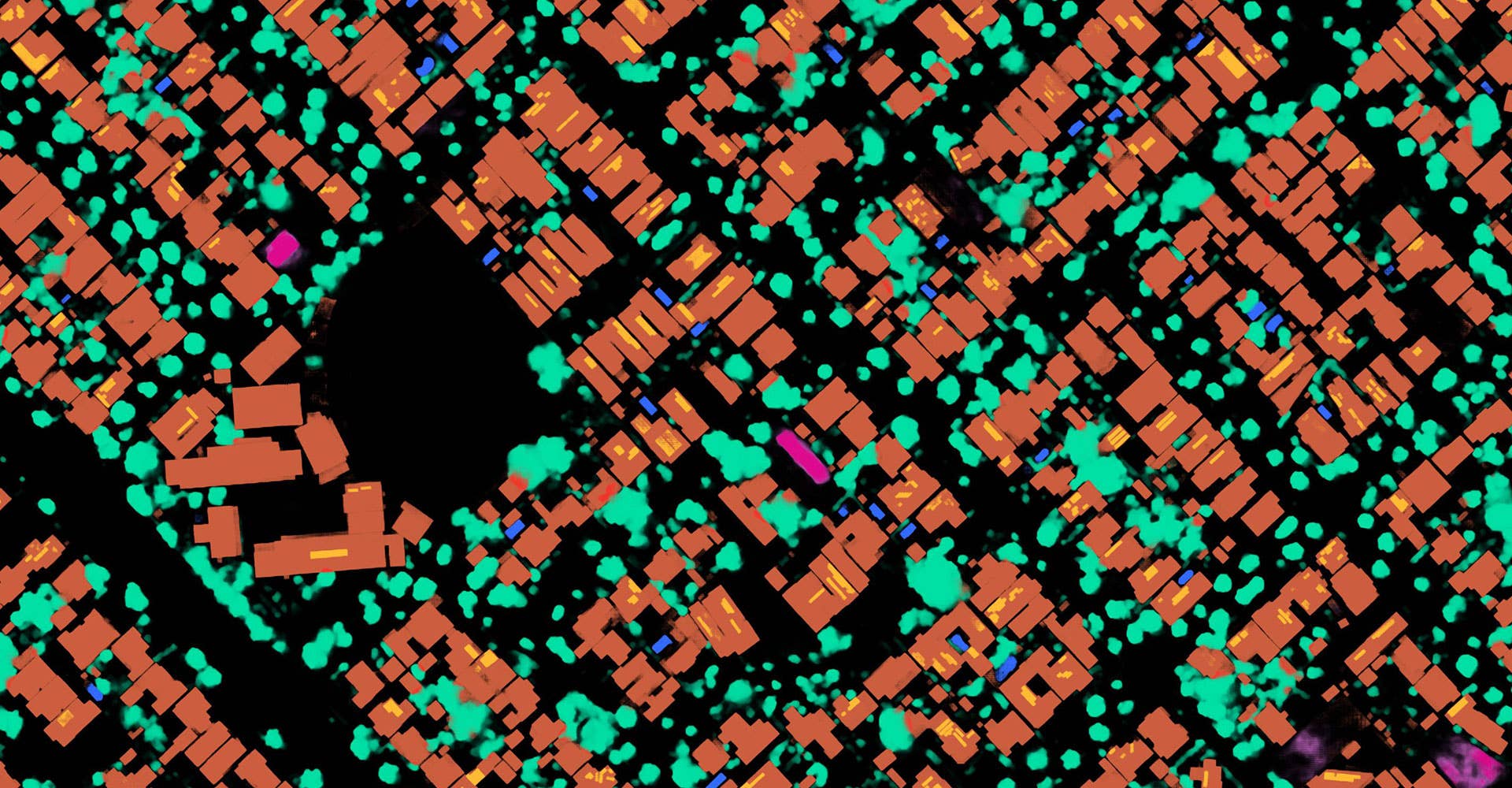 In part 1 of this series, we introduced a 10-year comparison of residential tree cover in Adelaide, from 2011 to 2021. How green is your city?

Although high resolution 7.5cm/pixel data was used to generate the statistics, we only discussed the high-level results. We’ll now dive into some of that data in more detail, to highlight some examples of what might be driving this change.

One of the best ways to both understand and be assured of the validity of the city wide numbers is to look at a selection of individual suburbs. Because the data can be visualised, and compared to the equivalent aerial imagery that generated it, the suburb provides a good spatial unit for understanding key drivers in change, and assuring ourselves that the measured changes reflect reality.

Top and bottom 8 (by absolute change in residential tree cover)

show the changes over time in the top and bottom eight suburbs in the study, ranked by absolute change in tree cover. To assist in understanding the causes, the tree canopy (green) is paired with the building cover (orange). Several findings are immediately obvious:

St Clair is one of the more fascinating and inspiring stories in the data set. Based on a little desk research, the suburb started initially as an old racecourse. A decade later, it is comprised of established trees, established dwellings, and has a focus on integrating the natural environment, with a wetlands walk through its centre.

The following graph shows massive initial building gain, which has slowed. But this development appears to still be in progress. The tree cover was initially reduced by clearing some existing trees, and ultimately the saplings planted at the beginning of the suburb's life have been cared for, and grown steadily and substantially over the decade. While it remains to be seen what happens in future (there are many factors that are important for ensuring saplings grow into the kind of full, mature tree canopy needed to achieve higher residential canopy cover), it appears to be off to a good start. 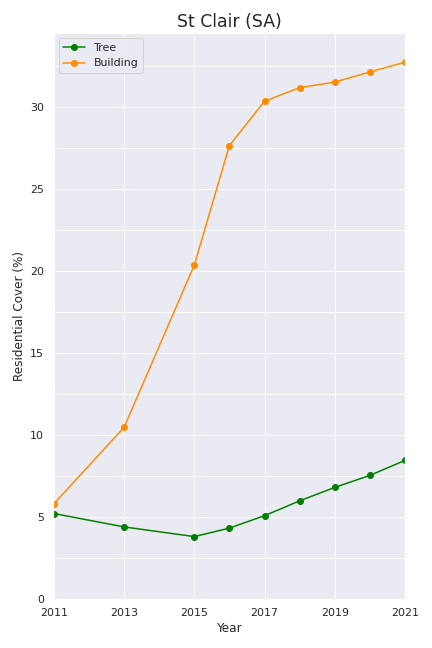 In some ways a similar story to St Clair, Northgate saw massive growth from around 4.5% to 10% residential tree cover over the decade. Already an established suburb in 2011 (founded in 2000 according to Wikipedia), the young trees as at 2011 continued to grow throughout the whole decade, and the last couple of data points indicate that growth trend is likely to continue in future years. 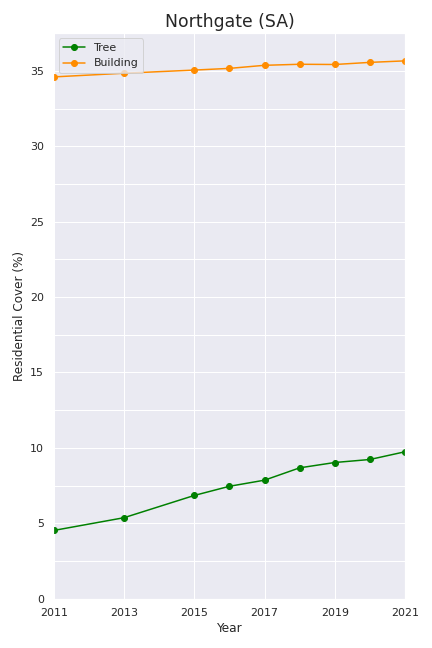 Munno Parra West is worth reviewing as it exhibits very high change in tree cover, particularly in the 2011 to 2015 time frame. The building growth indicates a new/rapidly growing suburb, but what could cause such sudden and large tree cover loss?

Observing the actual aerial imagery, there is a large section of cultivated vegetation in the north of the suburb that is removed to make way for housing. That accounted for, we can then observe modest growth in tree cover as the suburb is further established. 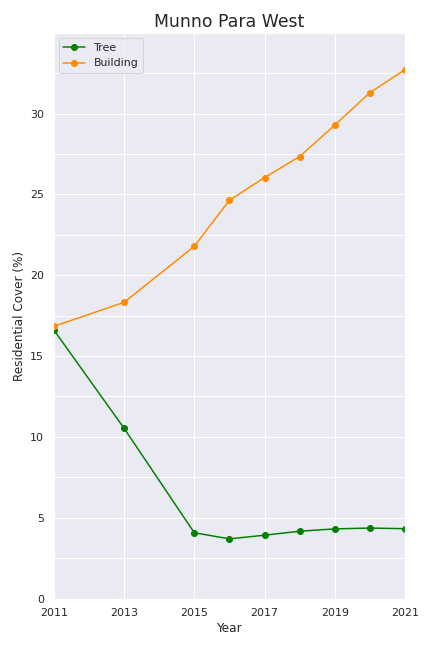 Vale Park is an example of a suburb that has gone from a moderately high level of tree cover in 2011, with noticeable losses through to 2021. The graph shows a fairly continual growth of new building cover, and reduction in tree coverage the same time — accelerating from around 2015 onwards. This is contrasted to the more sudden loss in Munno Parra West above.

Interestingly, the loss is not immediately visible just by inspecting the imagery at suburb scale — there are still many trees at the end of the time period. 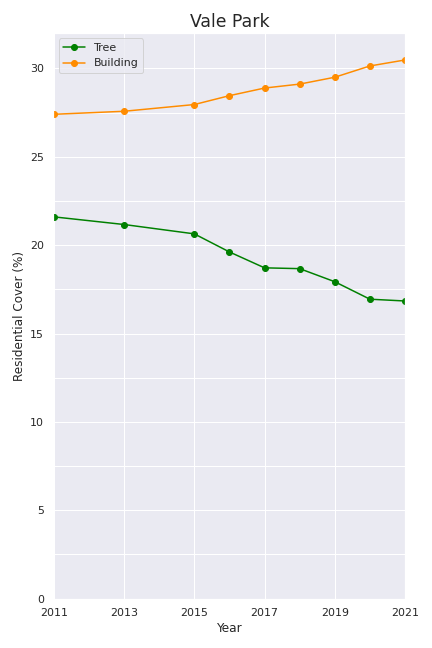 A more interesting picture emerges when looking at the Nearmap AI data. Just to explore a little further, we cover a range of some of the other available attributes:

The trends that now become clear are: A large increase in solar panel installation, some growth in the size of street trees, and removal of several of the largest pockets of trees, as they are replaced by buildings.

Stories like these are repeated throughout the 281 suburbs* in the study. The rich complexity of an evolving city means that we're best to leave comment on causative aspects of change to local experts — our focus has been on correctness of data, and exploring enough of the detail to give confidence in the results.

From the series above, we can gain a strong sense of conviction that the data reported at a high level is built on strong foundations. Usually, identifying areas of greatest change is risky in machine learning, as it is likely to highlight model errors and inconsistencies as much (or more) than genuine changes. Perhaps surprisingly then, the top and bottom eight suburbs of maximum residential gain and loss all bear out and support the statistics when observed visually in 2011 and 2021. Further, the individual time points track consistently to identify the primary source of change, whether gradual consistent growth, or a sudden event such as a new suburb being constructed at rapid pace.

In the next post in this four-part series, we’ll directly address some questions that have arisen around how Nearmap artificial intelligence tree canopy coverage compares to what has often been considered the ‘gold standard’, LiDAR. LiDAR is a detailed but costly mapping methodology that shoots lasers from a plane and measures the intensity of reflections. How will the Nearmap data fare? We’ll let you be the judge.

Find out more about accessing deeper insights with Nearmap AI or read the next blog in the series: Part 3 — What about LiDAR?