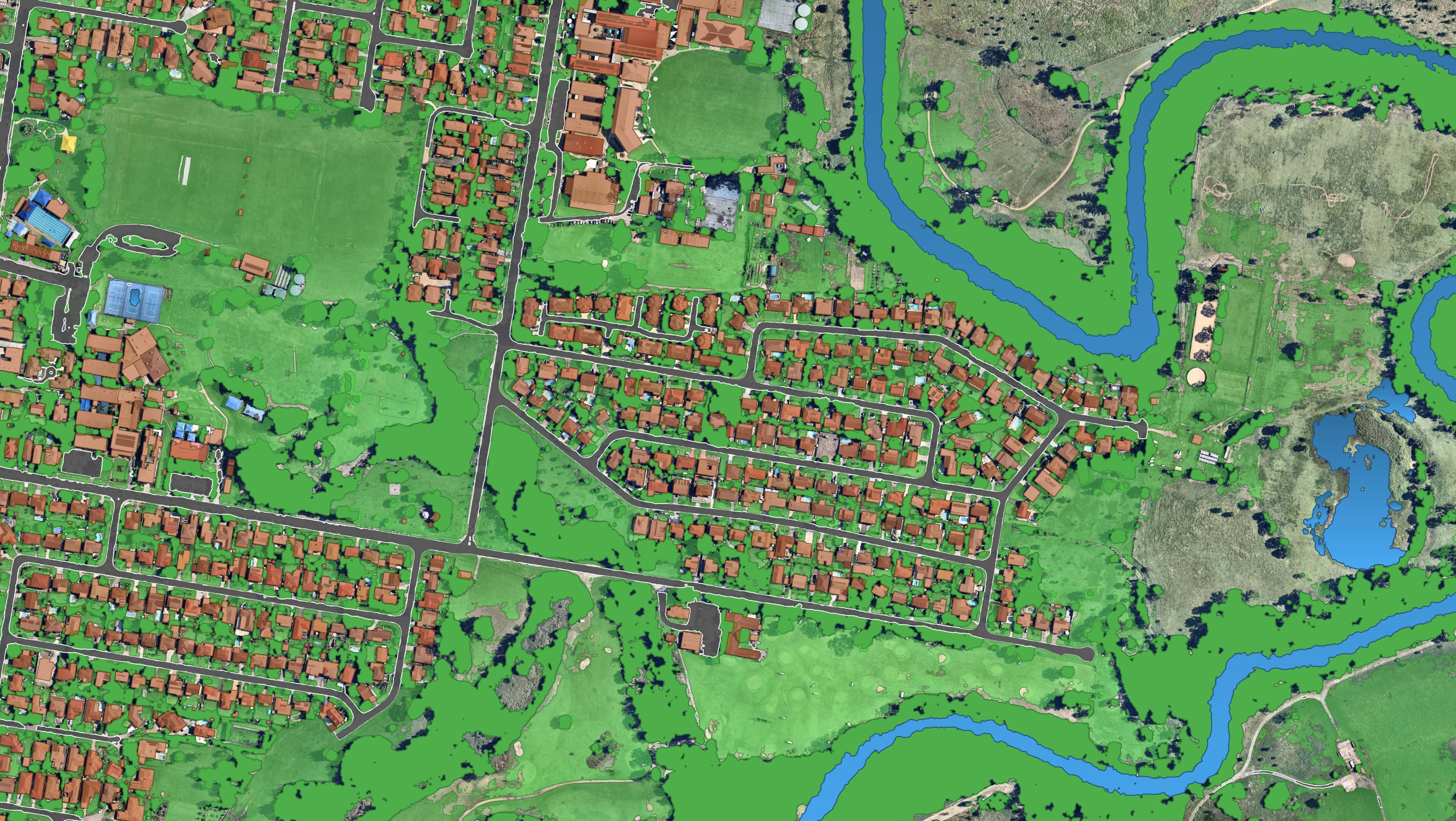 One of the most amazing things about working at Nearmap is bearing witness to the changing world around us. Since those first captures in the early days over Perth, Nearmap has spent the last 15 years assembling a unique, online, high-resolution visual history of the cities and spaces where we live and play.

Over the last half decade in particular, we’ve looked out at our planet through the lens of our world class AI System and tracked changes in time and space as they unfold at an ever increasing pace. We’ve watched as urban and suburban development has accelerated at rates never before seen in our socio-industrial history. And as population pressures increase, we’ve seen new housing, entirely new meshblocks and even whole suburbs being created leaving state and local governments rushing to catch up with relevant and informed policy.

Even within our leafiest cities, these last few years have seen significant shifts in urban forest strategies as local governments seek to preserve and increase the biodiversity in urban and suburban ecologies. At the same time we see larger houses being built on smaller parcels and urban heat islands proliferate.

In many local government areas, tree canopy cover is below 20% and in many cases is actually decreasing in the face of growing development. Efforts to mitigate this reflect a growing awareness of the key role that “Green Infrastructure'' plays in bringing environmental, economic, social and health benefits to local ecologies and economies.

Consequently, tracking and assessing changes in tree canopy and green spaces are essential ingredients that directly feed back into development application approval processes and guide future initiatives. The need to acquire regular, up to date insights and actionable location intelligence has never been greater nor had more far reaching consequences for all of us.

In this article, we argue that Nearmap solutions provide a reliable, cost effective, and accurate way to quantify and monitor Green Infrastructure for local government. Our customers leverage our unique combination of high resolution imagery with vegetation and land surface maps derived from our AI and 3D solutions to track and assess changes in the distribution and quantity of their local Green Infrastructure through time and space and its interaction with the changing built environment.

What is Green Infrastructure?

We’re all familiar with the word infrastructure but the phrase Green Infrastructure is perhaps less well known. It can be thought of as a network of green spaces in some area of interest such as a suburb, an LGA, a city or even a state.

It includes coastal reserves, waterways and wetlands, wildlife corridors and sanctuaries - as well as undeveloped land and greenways (open corridors for above ground “Grey Infrastructure"). It also includes street trees and urban vegetation, public, private and national parks, as well as rooftop, wall, and even private gardens. Anything else is now termed Grey Infrastructure - i.e anything that isn’t green and living - including buildings, gas and water pipelines, tramways, roads and more.

To date, effective Green Infrastructure management has relied on visible and infrared data sources from satellites or more commonly, localised capture technologies such as LiDAR. The problem is that LiDAR captures are expensive and the data is bulky and difficult to work with. But the bigger problem is the long temporal window between capture and actionable insights. This can be as long as 12 months in some cases - but this just doesn’t cut it any more.

Many councils have neither the funding nor the expertise to work with this technology and even when they do, often are forced to work off three to five year old datasets due to cost constraints. So due to the increasing pace of suburban development, it is often the case that by the time the insights are available, the situation on the ground has completely changed.

Moreover, due to tree removal exemptions on private land, many councils are not aware of and do not even collect data on private tree removal despite the fact that this is the major cause of observed suburban canopy loss. Consequently, policy is often formed based on incomplete or out of date data.

Imagine there was an affordable, frequent, consistent and accurate solution. And imagine it was available today…

How did we get here?

There’s an ancient Chinese proverb that says, “The best time to plant a tree was 20 years ago. The second best time is now.”

Unfortunately in many of our suburbs very little forward planning was done 20 years ago - but the good news is that many of our councils are fighting back. A 2021 survey by the Greener Spaces Better Places consortium found that 88% of Australian councils have an Urban Forest Strategy and almost 91% run active planting programs.

Urban forestry strategies tend to focus on public land and are aimed at increased beautification and liveability. The NSW Department of Planning and Environment is targeting one million trees planted by the end of this year and five million by 2030 in an effort to get to a 40% coverage across Greater Sydney. But these strategies are only as good as community attitudes towards trees and the council’s ability to protect them. And despite aggressive targets and programs, more than 50% of Sydney councils have actually lost canopy since 2013.

This is mainly because the vast majority of canopy loss occurs on private land where it is difficult to track. Public street trees and nature strips are often pruned or cleared by utilities or damaged by tall vehicles. More generally, trees are often removed due to perceived risk such as overhanging existing structures or pools.

Other causes include subdivision of existing properties, upsizing to a larger footprint and creation of additional structures such as granny flats on the same parcel. Finally, in an increasingly busy world, people are time poor and there is a growing preference for maintenance free yards.

This gradual transition from Green to Grey Infrastructure is the primary reason we see an increase in urban heat islands, localised flooding and a reduction in liveability and biodiversity as we cover the land with impervious surfaces to meet development demands.

Who cares about trees anyway?

Well, even if you don’t, there’re lots of great reasons to get with the program because trees really punch above their biomass (err..weight).

Trees increase property prices and provide energy savings. It is estimated that a 10% increase in local canopy roughly correlates to a $50K increase in property value.

Further, it has been shown that exposure to green spaces and in particular trees, is associated with better mental health and social cohesion, all of which feeds back into stronger local economies.

The presence and distribution of tree canopy provides reduced soil erosion, habitat links for native fauna, wind abatement and a reduction in heat storage. They also act as a buffer for carbon sequestration and storage as well as increased rainfall absorption. This means that we benefit from reduced storm water runoff with resulting loss of nutrients.

And more visibly for all of us, they act as filters on the very air we breathe by cleaning out atmospheric particulates resulting in lower levels of air pollution. Finally, they dramatically lessen the intensity and impact of urban/suburban heat islands.

So what’s not to love?

It should be clear at this point that effective and informed Green Infrastructure management is an essential ingredient for our national health and at Nearmap we’re leaning right into this.

Over the last six months our AI team has performed a first of its kind national study quantifying tree canopy across all Australian suburbs within our national capture footprint. Some of these results are available online - the worst and best suburbs in each LGA in our coverage can be seen on our “How Green Is Your City” webpage (for even more technical detail on how this works see this deep dive by our very own Dr Mike Bewley).

Our unique visual history allows us to go even deeper though. In a follow up study we assessed a decade’s worth of tree canopy distribution and change over the City of Adelaide. One of the best insights that came out of that process was a detailed quantitative comparison between our results and those obtained using LiDAR. These show unequivocally that these two methodologies are both valid and complementary.

So the question is no longer “which one do I use?” but rather “which one does it make sense to use?” To which the answer is obvious - the one that supports fast cost-effective actionable insights in a useful time frame.

Our imagery will cover up to 95% of the Australian population as urban and remote area captures expand, and the imagery from every single capture gets pumped through our AI pipeline. Since we fly over and capture major areas across Australia up to six times a year, we're frequently producing entirely new AI datasets just waiting to be used. We don’t need to do anything extra and all you need to do is subscribe!

And we are now taking this even further by bringing all of these pieces together allowing analysis of the interaction of both Grey and Green Infrastructure. Our AI packs include hard/impervious surfaces (concrete, asphalt, pavements, etc.), building footprints and roof materials as well as water bodies, lawns, soft natural surfaces and vegetation.

Our combined content solutions allow us to accurately estimate changes in Green Infrastructure across time and space at local, city or national levels, while our capture programs bring a frequency, clarity, consistency and accuracy to effective and sustainable environmental management.

And that benefits us all.

Learn more about how Nearmap can provide local governments with a reliable, cost effective, andaccurate way to track and manage Green Infrastructure, visit our Government page.

Find out how your city ranks for tree coverage with verified insights from Nearmap AI below.