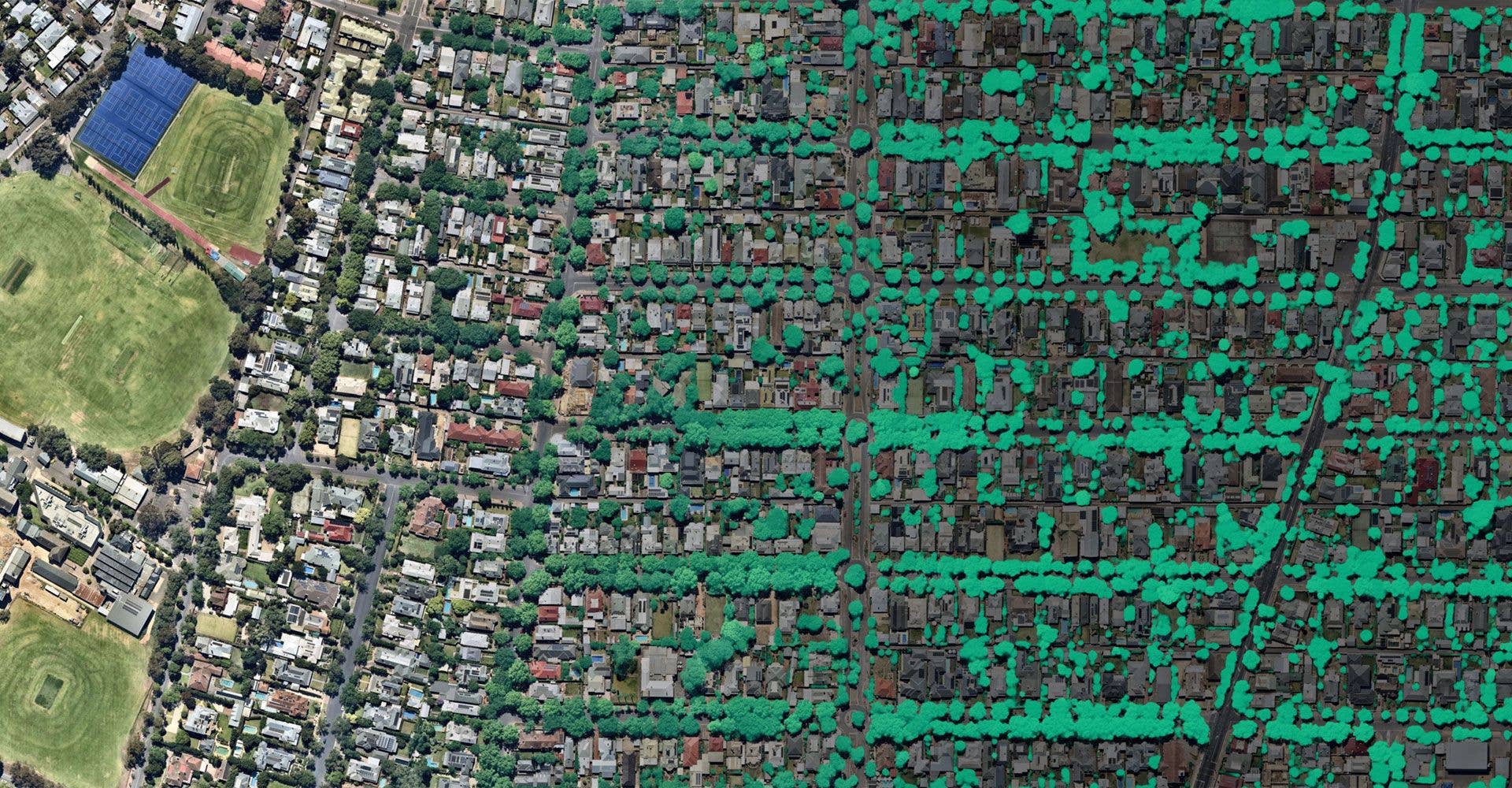 After our ground-breaking national study of tree cover in Australian capital cities, Nearmap recently followed up with a new first. Instead of going wide across our Australian coverage, we went deep in one capital city: Adelaide. How green is your city?

The story has been featured by several media outlets, including online articles in the Adelaide Advertiser, Australian Property Journal, and ABC News.

Covering the 10-year span from 2011-2021, we analysed the changes in residential tree canopy across 281 suburbs in Adelaide.* Rather than a comparison across only two dates, which risks artefacts in one date skewing the result, we used seasonally-matched data from nine distinct points in time across the decade to confirm any trends.

We’ve received some questions along the way, including how we arrived at the numbers. This blog — part one in a series of four — provides the technical background, and answers some of the key questions.  A link to part 2 of the series is provided at the end of this article.

The technical back-story for the previous national study is also worth a read as it gives good background for the Nearmap artificial intelligence capability, and the fundamentals of the analysis.

I'll assume you've read the articles linked above to avoid too much repetition! They cover concepts like residential mesh blocks, deep learning and machine learning, and the Nearmap rich historical archive of imagery that organisations can use to derive powerful insights.

The fundamental aspects of the national study were continued for consistency. Key points include:

Longitudinal Study — which dates and surveys were included?

In order to acquire robust statistics for the 10-year change, we ran our latest Nearmap AI system on imagery in the January-March window for every second year between 2011 and 2015, and then every year after that until 2021. While this is a small subset of the total surveys (captured around six times per year since 2009), viewing the same window each year allowed us to ignore the small seasonal effects introduced by leaf-off deciduous trees having slightly smaller footprints. How green is your city?

The reason to cover nine different years in the study, and only report on the first and last (2011 and 2021) was to focus on the net change over the decade. The trend between the two dates supports the overall conclusion with numerous analysis dates. This removes the chance of a single unusual year producing a biased result (e.g. drought/bushfire, or less-favourable capture conditions). It also serves to help when we deep-dive on individual suburbs, to tell the story of the exact nature and timing of changes that occurred.

A series of statistical analyses were performed on the 281 suburbs that were fully covered both in the 2011 and 2021 AI data. Statistics within a suburb were calculated on a per unit area basis. Specifically, residential tree or building cover first calculated the percentage by area of tree canopy or building in each residential mesh block in the suburb. The average of all the residential mesh blocks in the suburb was then taken. While this is not strictly the area coverage within the suburb, it reduces the impact of occasional unsuitably large mesh blocks on the average (which tend to occur in more volatile areas of change such as a farm that has been recently turned into a new housing development), and provides a better representation of the lived experience of typical residents within that suburb.

Adelaide-wide statistics are provided on the suburbs as a group. In general, the statistics and graphs describe the count of the suburbs (e.g. 18 suburbs with >10% gain in residential tree cover). For these, the area of the suburb is not taken into account. This means that a larger, less densely populated suburb carries the same weight as a smaller urban one, again to focus better on the lived experience of residents.

Where multiple surveys were available in the January–March window of a given year, the average result was taken at a mesh-block level of surveys within that window. This was reasonably common, due to survey overlaps, and the six times per year captures (granting a January and March survey on a given location, for example). This adds an additional level of robustness to the single date measures.

Where 10-year comparisons are made, we compare this averaged result from 2011 and 2021. Any suburb without full coverage on both dates was excluded.

Where graphs over time are shown, a small amount of smoothing is applied, to ensure that small amounts of noise are not interpreted as genuine changes. A rolling mean with Gaussian window, standard deviation 1 year was applied.

When doing a new study, getting the numbers right is critical to our mission, and we spend a huge amount of time ensuring this is the case.

Our role is to inform with facts rather than infer what should have been/should be done.
Dr Michael Bewley, Senior Director of AI Systems, Nearmap

Firstly, the Nearmap AI documentation pages describe in a fair degree of detail how the data is produced, verified and versioned. We used exclusively Gen 4 Nearmap AI content for this study, with the Building Footprint and Vegetation AI packs.

Secondly, large amounts of qualitative analysis were performed, both exploring the behaviour on individual suburbs, and visually comparing against the only relevant source of reference, a LiDAR map produced by blending two years’ worth of LiDAR tree canopy measurements across Adelaide. We’ll provide more detail on the comparison to LiDAR in a follow-up post.

With these results, we’ll commence with the ‘headline’ summaries, working backwards to the individual suburbs and raw data comparisons.

This figure gives us the median – where half the suburbs lost at least 9.8% of their tree cover over the decade.

In the map below, we re-use the same colour scheme from the horizontal bar graph, and plot the suburbs spatially (with the ABS 2021 "SAL" suburb outlines). The map shows some clearly clustered areas of growth/loss, but also some interesting locations in the north, where high growth and high loss are interspersed. 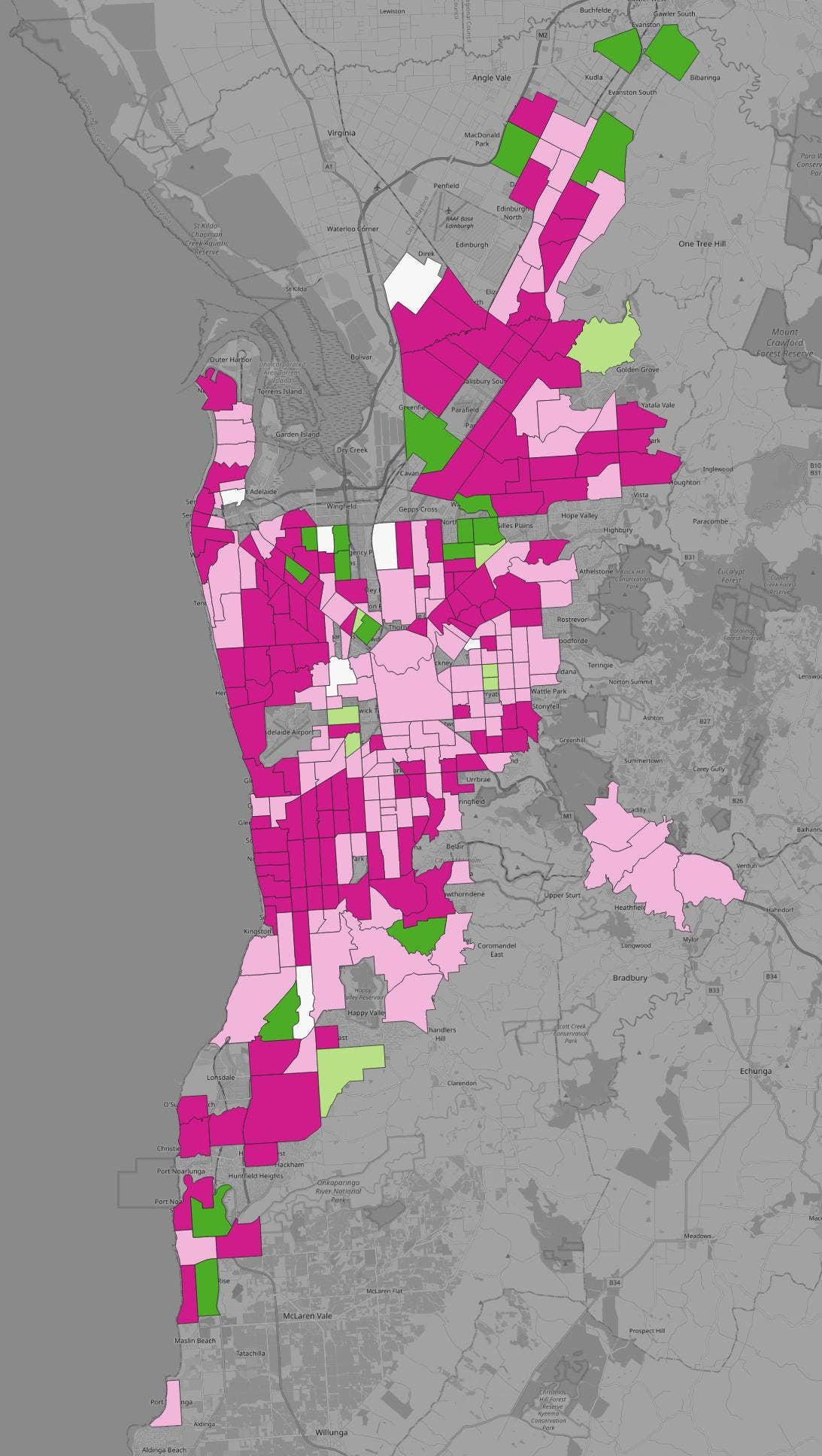 The following map is a sub section of the study area, showing only the residential mesh blocks that were used to form the suburb-level analysis. 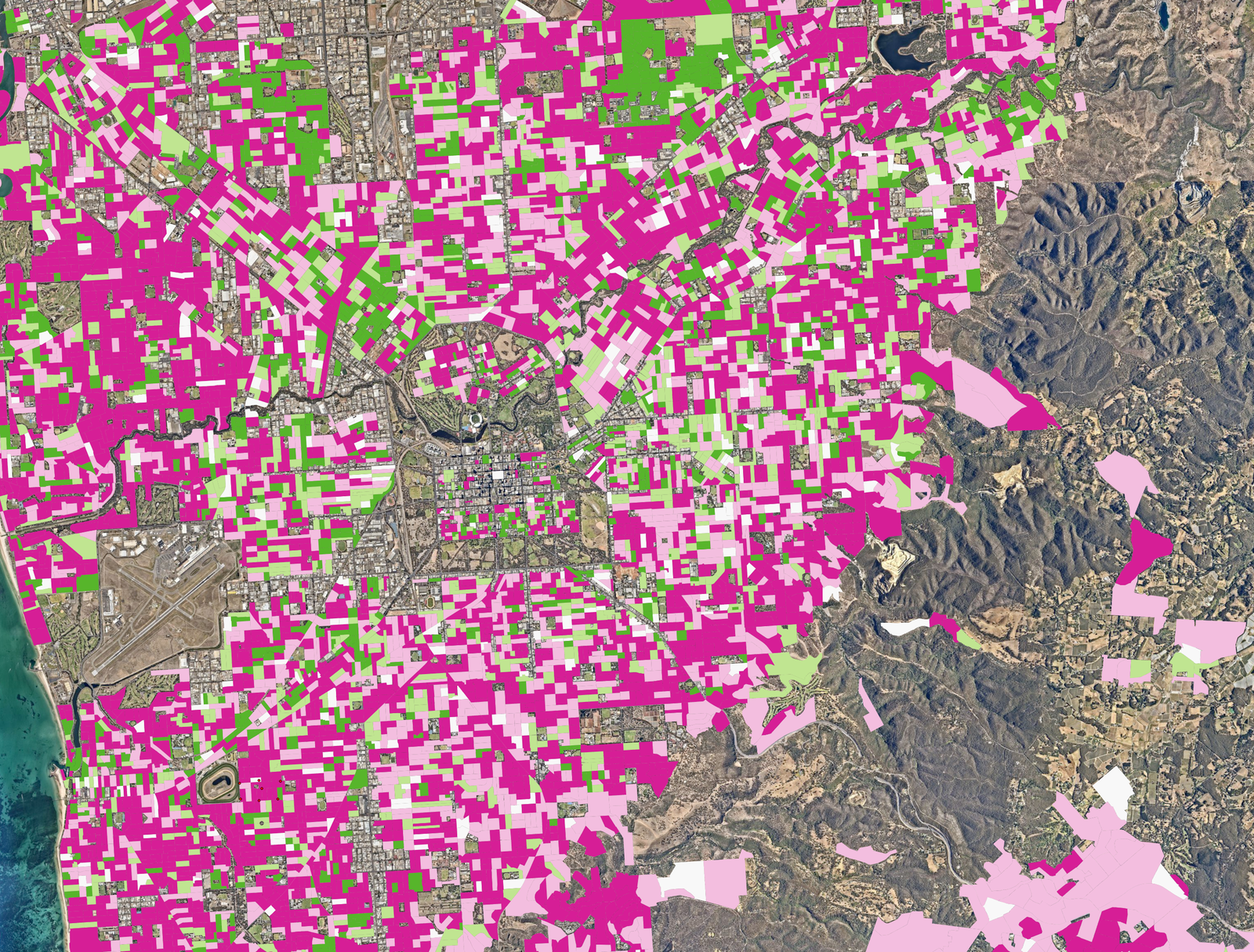 Since revealing the statistics, we have had some questions around ignoring the non-residential mesh blocks (such as parks and industrial areas). These numbers demonstrate results with and without those mesh blocks, and show a fairly similar drop over the decade. This indicates that the changes are sufficiently large and widespread that the precise analytical approach does not have an outsized impact on the study.

For these numbers, we ignore suburb boundaries, and take all mesh blocks in the study area:

Conclusion: Learning from the past, and monitoring for the future

While the overall story saw tree loss outweigh growth, many things can be said about analysis and the benefit of hindsight.

The important thing is to learn from the stories of the past, and monitor progress regularly to check the impact of interventions in the future.
Dr Michael Bewley, Senior Director of AI Systems, Nearmap

In this post, we explored high level, aggregated statistics about city-wide changes. The focus of the analysis was the relative change from 2011 residential tree cover to 2021. However, we see a similar story play out when the non-residential areas were included.

While the focus here was on Adelaide, the Nearmap capture program, visual and artificial intelligence products mean that this study is possible to repeat in any of the hundreds of urban areas in our capture program in four countries, and valid comparisons may be drawn due to the consistently applied methodology.

We'll be curious to see what comes of this work, and are eager to collaborate with organisations that want to both understand where tree canopy (and our dozens of other AI-derived layers) in their area of interest has been in the past, and want to work together to actively monitor how they are shaped in future.

In the next post — part two of this four-part series — we’ll look at the temporal change in residential building and tree cover throughout the decade for a number of suburbs, validating the data at a deeper level, and uncovering some fascinating stories of change.

Find out more about accessing deeper insights with Nearmap AI or read the next blog in the series: Part 2 — Suburban stories.