An increase in catastrophic events along with rising customer and regulatory expectations are converging to create heightened operational and financial pressures on multiple fronts for general insurers. These pressures range from claims handling and customer satisfaction, to workforce management, cost management and decision making around reserves and risk-off considerations.

Beyond impacts from recent and ongoing financial services reforms, new regulatory requirements for entities handling claims and settlement services will lead to changes to internal claims policies and workflows where third parties are involved.

The COVID pandemic has brought about significant operational impacts, primarily as a result of changing workplace and consumer behaviours. For example, various COVID restrictions result in many policyholders becoming increasingly cautious of unnecessary visits to their homes and businesses.

We’ve also seen that insurance adjusters were unable to cross state borders, or even unable to visit in-state properties during border and lockdown periods. The way individuals are changing how they work and travel also puts increased pressure on insurers to better manage claims and the customer experience.

Technology initiatives that were on a multi-year timeframe in some cases have been able to move more quickly as a result of the need for greater digitisation resulting from COVID-related and regulatory changes.

Still, many firms are still reluctant to adopt the latest technology which can bring about both operational efficiencies and greater customer satisfaction, as evidenced by the release in February by the Commonwealth Treasury report, Reaching for the stars: Australian firms and the global productivity frontier. The paper said that “our findings suggest that part of the slowdown in aggregate productivity growth in Australia reflects slower diffusion of cutting edge-technologies and processes, and firm-level improvements”.

Now is the time for insurers to use technology to simultaneously provide a more efficient process and create a better customer experience.

Responding to Changing Attitudes and Behaviours

Claims operations are poised to be a major beneficiary of the COVID-accelerated shift to digitisation. Working from home experiences and changing expectations are leading to the need for more collaborative and desk-based technological solutions to meet both the requirements around claims and costs processes internally — and for customers externally.

At the same time as claims processes are advancing, the frequency and intensity of natural disasters are set to rise, according to the United Nations. The UN says economic losses from disasters have increased sevenfold from over recent decades, going from an average of $49 million a day globally to a whopping $383 million per day.

Storms, the most prevalent cause of damage, resulted in the largest economic losses around the globe. Flooding and bushfires are also becoming much more prevalent and impactful as extreme polar warming has been observed in both hemispheres, and this is expected to continue.

The Insurance Council of Australia says the last three years have illustrated how devastating natural disasters can be, with insurers having paid out more than $8.9 billion in natural disaster claims over that period, with more than $6.1 billion paid out since the 2019-20 bushfires. 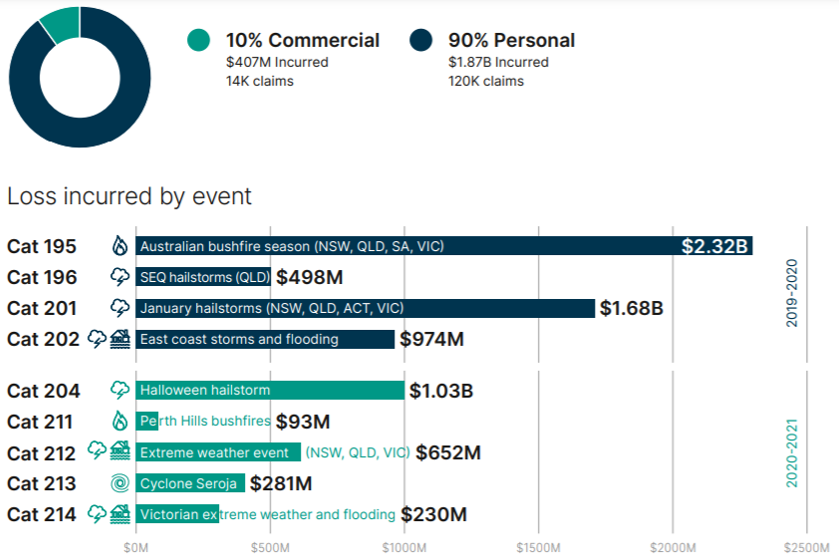 This means effective post-catastrophe responses require quick analysis of the severity of events, including the impacted and surrounding areas, along with better claims management and total liability in order to accurately set reserves and pricing.

Nearmap has an extensive database of high-resolution aerial content to quickly identify high-risk properties by providing the latest source of truth and rich historic content for risk management, underwriting, renewals and claims.

Available is over 10 years of historic high-quality imagery which can easily be used to see how a property has changed over time, and the technology seamlessly integrates with workflows via APIs. Nearmap aerial content is also easily available for simple web viewing through the MapBrowser application.

ImpactResponse, the post-catastrophe program from Nearmap, provides a solution to the various challenges mentioned in this article. Let’s explore in more detail four key areas where a lack of key tools in an insurer’s tech stack — in particular, tools to visualise and understand property insights — can have real impacts on customers and on internal business efficiencies and costs.

In order of preference, the improvements in the claim experience they asked for were efficiency (33%), more responsiveness and communication (25%) and more transparency (20%). Guidewire and McKinsey report that customers who are happy with the claims process are 80% more likely to renew their policies, contributing to nearly 30% profitability for insurers.”

As we’ve seen in the major catastrophe events of the past year, the sheer volume of claims can pose a huge obstacle to mounting a fast and accurate response to the policyholder.

This is even more evident when loss adjuster resources are limited or over-extended, and when ground access may be restricted because of safety protocols or disrupted transport routes, ‘efficient triaging’ becomes especially important to be able to maximise field resources.

With the advantage of Nearmap rapidly available post-catastrophe aerial surveys, insurers can access best possible property data and intelligence to quickly assess the post-event condition of a property, without waiting to send an adjuster on site.

Around 70% of catastrophe losses from the five major events in FY21 were attributable to homeowner policies. Therefore, the ability to close a claim quickly with a desktop adjustment or understanding where to send adjusters to the most complex or most high value claims provide huge benefits for an insurer and their customers.

For natural disaster events, the potential for claims leakage increases. One insurer using Nearmap ImpactResponse reported that for a major event last year, the repair and construction estimates were potentially overinflated by up to 40% — a potential overpayment worth tens of millions of dollars.

Easy desktop access enables insurers to directly see before and after imagery of affected properties, with AI-enabled tools able to quickly identify features on the ground.

You can simply toggle on and off layers including swimming pools, solar panels and more to help emergency crews identify water sources, electrical risk zones (solar panels after a flood for instance), and more.

MapBrowser also offers tools for annotation and mark-up to easily map evacuation routes and more so all teams can operate from the same picture when responding. The aerial map measurement tools within MapBrowser provide specific metrics including area, height and more.

In addition to the current state of a property, what’s occurred on that property before the event is of critical importance to be able to validate a claim. Missing or inaccurate information about the pre-event state of the property can impede a claim investigation.

Without knowing what was on the ground before a disaster, it’s difficult to understand exactly what’s changed.

Every ImpactResponse subscription comes with regularly-updated vertical imagery, refreshed across Australia up to six times annually and covering 448,000 sq km, across 10.6 million properties, in addition to post event aerial surveys, enabling pre- and post-catastrophe comparisons to measure the true impact.

Before and After Aerial images of Flooding

Following a major weather event, Nearmap will get planes in the sky to immediately capture aerial surveys of an impacted area (pending conditions). For more extreme events, coverage spans far and wide — like with the Black Summer Bushfires where Nearmap captured 28,000sq km of post-fire terrain from above.

Insurers can reconstruct a timeline of events with dated, timestamped imagery, and validate photos submitted by claimants to support an investigation and mitigate potential fraud.

With industry-leading image resolution of 5.6cm, this cutting-edge tool for remote analysis can help insurers quickly understand all factors affecting a property with a rich stack of varying content — from 2D to 3D and AI.

The use of virtual solutions like self-survey tools and high-resolution imagery quickly enable claims teams to process claims remotely, allowing them to maintain and even improve response times while being able to adhere to any pandemic restrictions.

These new desktop-based technologies lead to improved decision making around customer experiences in the critical “claims moment” and deliver overall improved pricing and financial performance for an insurer in relation to natural disasters.

To learn more about enhancing your insurance workflows with Nearmap, visit our ImpactResponse page.